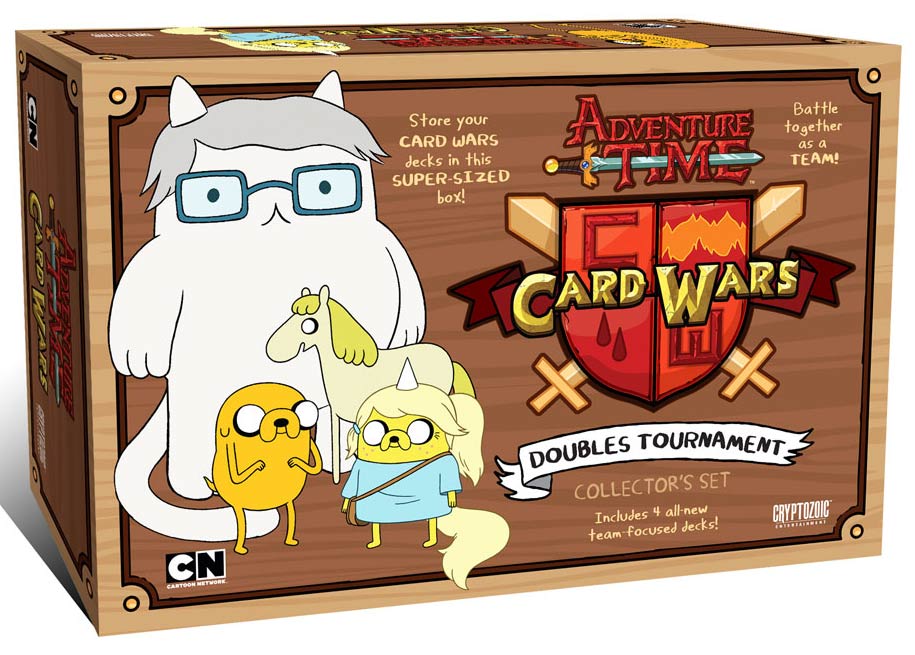 The game you know and love has just doubled down on the fun! Grab a partner and do-si-do your way to victory in tag-team, head-to-head Card Wars combat! It’s Jake and Charlie vs. Grand Prix and Moniker in the Adventure Time Card Wars: Doubles Tournament Game, packed with all-new cards, all-new original art, and all-new team-rrific effects!

Expanding on the previous one-on-one Card Wars experience, the game allows four players to become characters from the series as Jake and Charlie’s “Team Dignified” take on Grand Prix and Moniker’s “After School Program.” Play is inspired by the action from the “Daddy-Daughter Card Wars” episode and features battles taking place on a field of eight Lanes, just like on the show.

The Dragon & Flagon: a tavern world-renowned for its most magical drink, The Dragon! Legend has it that one sip of The Dragon can give a hero wondrous abilities beyond their wildest dreams – but with a tavern full of thirsty adventurers and only one flagon left, things are bound to heat up.

Prepare your magic and grab your weapon because there’s only one true objective in this brawl – and it’s not just a sip of The Dragon! Only one can win and emerge with the reputation as the greatest fighter ever seen within the walls of The Dragon & Flagon!

The Dragon & Flagon uses 3D components and programmed actions to create a thematic barroom-brawl-simulation board game. Characters will be picking up chairs, throwing mugs, running across tabletops, pulling the rugs out from under each other, and trying to claim a sip from the fabled flagon!

Descent: Journeys in the Dark (Second Edition) – The Chains That Rust

Your journey thus far has taken you deep into the Mistlands and the domain of Waiqar the Undying. In this land of shifting mists, uncertain footing, and terrifying undead, you are certain of little. The heroes that you’ve fought alongside for years seem suddenly alien and unknowable. Spirits loom up out of the fog and vanish moments before they touch you. Even the air you breathe seems to be worming its way inside you, tainting your blood and binding you to the Mistlands with indelible bonds. More and more, you are sure of only one thing: you must find a way to escape.

The heroes’ adventures through the Mistlands continue with The Chains That Rust, a new Descentexpansion that pits your might against ever more deadly dangers. Within this expansion, you’ll discover an entirely new one-act campaign that can be played on its own or as a sequel to the campaign included inMists of Bilehall. New Tainted cards and a new Overlord class give the overlord player new tools, even as eight plastic figures swell his armies with new monsters. Finally, you can stretch beyond your hero’s traditional Class decks for the first time with the addition of hybrid classes!

In the wilds of Terrinoth, strange beasts have begun to gather. Innocent townsfolk hurry home at night, barring their doors behind them, as bloodthirsty, savage creatures venture farther and farther from their lairs in search of their next meal. The realm has called upon its greatest heroes to venture into the hills and mountains to confront this threat. Only the most stalwart will return with Runebound (Third Edition): The Mountains Rise – Adventure Pack!

Like other Adventure Packs, The Mountains Rise offers new cards that can be incorporated into any existing scenario to dramatically change the flavor and feel. Fifteen new adventure cards (five per deck) introduce new enemies, events, and quests while twenty new asset cards and ten new skill cards give you dozens of new ways to customize your hero. Many of these new assets come with new combat tokens, some of which introduce new combat symbols to the game — ensuring that your Runebound battles will never be the same. Finally, you’ll gain an entirely new hero: Nanok of the Blade, a warrior who eschews armor in favor of the pure thrill of battle.

The coming of the dark star has long been foretold among the dark prophets of Terrinoth. When it falls, they say, an age of darkness will overtake the world, and its coming shall be heralded by a rain of dark shards that corrupt every stout and honorable soul. This dark and corrupted Terrinoth becomes the focus of your struggle to survive with the Runebound (Third Edition): Fall of the Dark Star – Scenario Pack.

Like other Scenario Packs, Fall of the Dark Star introduces an entirely new scenario to your games of Runebound, offering a substantially different experience with thirty new adventure cards: ten for each of the three archetypes. You may battle a Starborn Specter or travel to the Howling Valley in search of a fallen dark shard, but no matter where you go a new deck of story cards continues to raise the stakes as you search for the dark shards that fall from the heavens. Finally, you’ll find an entirely new hero, Zyla, a being from the Aenlong realm whose otherworldly powers have led her to become a hero of Terrinoth.

You can find everything you need in the backstage: Lord Chamberlain to get additional stunning actors, a prompter for those who forget their lines, a milliner for a costume with a panache, an architect to redesign the frontage of your theater…

Prepare for success and a new theater season with Shakespeare: Backstage, the first expansion for Shakespeare! New actors, new objectives, new costumes, and an innovative stage set allow you to shine when the curtain rises and all the lights are on you. Backstage cards allow players to utilize unwagered cylinders by placing them on the deck and spending them on special abilities, such as placing fewer rest tokens, adding hats to actors, or increasing ambiance.

Grifters (formerly “You Dirty Rat”) is a hand-building game that has all the fun of deck-building games, without the deck. Set in the Dystopian Universe, players take on the role of powerful crime bosses, building their criminal organizations by carefully recruiting new operatives with specialized skills and directing their team’s nefarious deeds. All of your specialists are either in play or in your hand, ready to be used as you command. This unique hand-building mechanism gives you total control of your strategy.

Grifters is all about stealing as much money as you can from the corrupt government, malicious corporations, and your rival players. Each player starts the game with a hand of six Specialist cards, each with unique abilities. Your objective is to use this team of six Specialists to recruit more criminals, complete jobs, steal from the government coffers and swindle your opponents.

Don’t Mess with Cthulhu is a social deduction game with secret identities. Players are either Investigators trying to keep Cthulhu from waking and controlling the world, or Cultists that want to bring the world to a disturbing end.

Before each round players receive a number of Investigation cards, which they look at but then shuffle and put in front of themselves so they know what cards they have, but they don’t know which card is which. Each round has a number of actions equal to the number of players in the game. Players take actions to reveal Investigation cards, and gather all unrevealed cards are shuffled an redistributed evenly among the players.

Yet again, a ravening horde of horrible zombies has shambled forth to devour the living. It must be a day of the week that ends in ‘y’.

In I Hate Zombies., 2-12 players face off in a climactic battle for the very fate of the world that will last between 10 and 20 minutes. Some of the players will be the noble last survivors of humanity, while others will be dirty, wretched brain-guzzling zombies. To see who survives, they will engage in that time-honored tradition, that Sport of Kings…

Although the valiant humans each have a special ability to aid them in their struggle to survive, the zombies are tougher to kill, and humans they kill turn into more zombies, and certainly let us not forget the spleen-churning stench.

While the game could be succinctly described as Rock-Paper-Scissors with special abilities, the abilities add some interesting decision making for the zombie players as to which humans to focus their brain munching beam on, and when. So, while the game uses the RPS mechanism, there are real and interesting decisions to be made which will have the zombies debating their strategy (or at least as well as their limited mental capacity allows).

If you hate zombies (and you should!), you’ll find altogether more zombies than you’re comfortable with in I Hate Zombies.

You are all thieves! Each round in Thief’s Market you roll the loot dice and split them up, then use your earnings to buy devious plans, henchmen, and finery in order to become the most notorious thief of all!

When the display of available cards to purchase can’t be refilled, the game ends. Players with the most henchmen and gold score bonus points, then the player with the most notoriety in cards, tokens, and bonuses wins!

The Pursuit of Happiness

We all have one common desire: the desire for happiness. As we build our life, taking steps towards the pursuit of happiness, we come closer to the realization that happiness lies in the pursuit.

The Pursuit of Happiness is a game in which you take a character from birth and you live the life you always wanted. Using a worker-placement mechanism with time as your workers, you take on projects, you get jobs, you buy items, you establish relationships, you raise families. The possibilities are endless as you live the life you have always wanted.

How much will you be able to achieve in just one lifetime during The Pursuit of Happiness?

• In which year was Close Encounters first in theaters?
• Which state gets the most snow each year?
• How many albums has Madonna sold?

It’s likely that you don’t know any of these facts, but you might have a rough idea, and that’s good enough because America is a party game in which being close counts. And what if you have absolutely no idea what the answer is? Take advantage of your friends who do know. And if you realize that no one (including you) seems to know what the answer is, you can bet against everyone!

In America, each player uses their knowledge of pop culture, food, products, games, sports, and United States history to score more points than their opponents. If your opponents know something that you don’t, you can leverage their knowledge to your advantage, scoring more than them with clever play. The cards have full color clues to help you, as well as interesting factoids for every question in the game. With almost one thousand questions covering more than three hundred topics, America will be a favorite for family and friends for a long time!