There Is My Claim is the fourth Chapter Pack in the War of Five Kings cycle for A Game of Thrones: The Card Game, and it continues your journey through A Clash of Kings, the second book in George R.R. Martin’s epic saga. Here, you can evoke the turmoil of the War of the Five Kings with plenty of new cards that interact with Kings, even as the winter winds rise and the Summer and Winter plot traits become more important to your strategy. Finally, you also gain access to powerful new unique characters, including Jojen Reed, Pyat Pree, Jaqen H’ghar, and new versions of Stannis Baratheon and Aeron Damphair.

Martial Law is the fifth and penultimate Data Pack in the Flashpoint Cycle for Android: Netrunner, and it advances our understanding of how deeply New Angeles has plunged into chaos. Its citizens are trapped in their arcologies or huddled together in whatever safe places they can find. The city’s streets have become a warzone. The corps can’t or won’t restore order.

The time has come for the U.S. government to intervene.

Shock and awe are the order of the day in Martial Law. Starting with two new neutral currents, one each for Runner and Corp, the expansion’s sixty new cards (three copies each of twenty different cards) are going to bring a new order to the world’s largest city—one way or another. But when this new order is established, who will be viewed as the winners? And what will they have gained?

New Angeles is a board game of corporate greed and machinations for four to six players set in the Android universe. You and your friends each gain control of one of the worlds’ most powerful megacorporations. Then you use your wealth and influence to create more wealth and more influence. Make piles of money, outperform the competition, and you’ll be a winner.

To do this, you’ll cut deals and forge temporary alliances. You’ll leverage your credits and maneuver for valuable assets. All the while, you’ll also need to keep an eye toward the masses, striking deals with the other corps as necessary in order to keep a lid on crime, disease, and unrest. If you want to maximize your profit, after all, you need to keep New Angeles open for business! 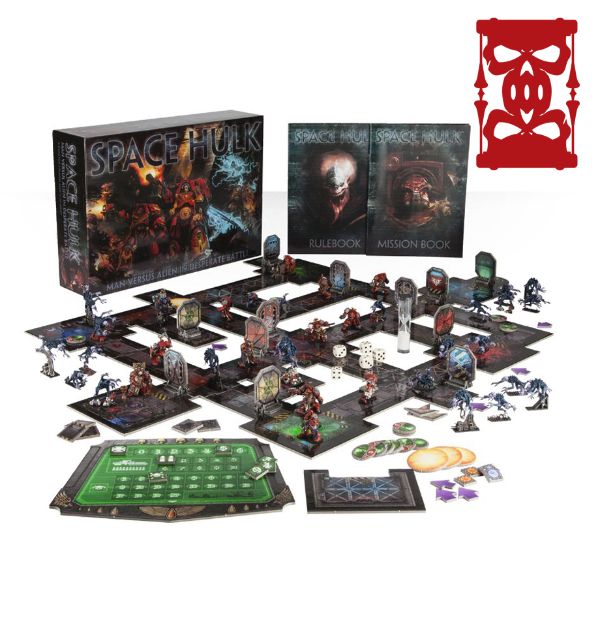 Space Hulk – Pit the mighty Blood Angels Terminators against a lethal swarm of agile Genestealers in this two-player board game. Inside the cramped confines of a derelict Space Hulk known as the Sin of Damnation, the Blood Angels must fight to save Mankind from the alien menace that lies within.

Games of Space Hulk are played on a gaming area made up of high-quality card tiles which fit together to create the cramped confines of the Space Hulk. Each of the 16 missions included in the boxed game uses a different set-up, or alternatively you can assemble the pieces in any way you like and create your own bespoke games.

In addition to the booklets and miniatures, you will receive a set of high-quality card tiles that make up the gaming board. Included are: 110 gaming counters, 77 corridor and room sections, 2 new boarding torpedoes , a turbo-lift, 20 doors with plastic stands, 1 mission status display, a sand timer and 5 dice.