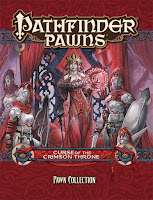 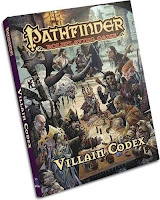 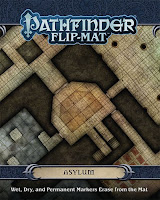 Whether you’re investigating a string of strange occurrences plaguing an institution of healing, or braving a forgotten sanitarium, Pathfinder Flip-Mat: Asylum has you covered. Each side of the Flip-Mat features structures serving as a prison for the unlucky and the mad. One side features an enlightened institution, while the other is a remote and dreary and forlorn fortress. Don’t waste your time sketching when you could be playing. With Pathfinder Flip-Mat: Asylum, you’ll be ready next time your players want to delve the depths of madness!

On tabletops across the world, the Flip-Mat Revolution is changing the way players run their fantasy roleplaying games! Why take the time to sketch out ugly scenery on a smudgy plastic mat when dynamic encounters and easy clean-up is just a Flip away? 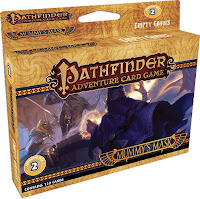 Your Mummy’s Mask adventure continues! You’ve barely started exploring the tombs of Wati when the dead began to rise throughout the city. You’ll need to calm the panic in the streets before you can cross swords with the cultists behind the undead uprising. The Pathfinder Adventure Card Game: Empty Graves Adventure Deck is a 110-card expansion that adds 5 new scenarios to the Pathfinder Adventure Card Game, and also includes new locations, villains, monsters, curses, traders, loot, and more.

Pathfinder Adventure Path: The Whisper Out of Time (Strange Aeons 4 of 6) 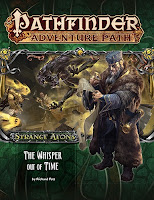 With their memories once again intact, the adventurers continue their pursuit of Count Lowls after hearing that he’s set course for a lost city in a remote part of Casmaron called the Parchlands. On the race to find the wayward count before he does something terrible, the adventurers must first visit Cassomir where they believe he is meeting with an old associate, but find only danger in his absence. Then, they travel to Katheer, capital city of Qadira, to track down a blasphemous tome in a hidden library in order to find details of the count’s destination. Finally with the information in hand, they venture to the slave-trading city of Okeno for the final piece of the puzzle and where they meet a mysterious and alien ally. The race is on to stop their crazed nemesis and learn more about his loathsome plans before they stumble onto something too large to tackle!”The Whisper Out of Time” is a Pathfinder Roleplaying Game adventure for 10th-level characters. The adventure continues the Strange Aeons Adventure Path, a twisted delve into madness that pits the heroes against the cosmic horrors of the Cthulhu Mythos. A selection of new monsters, an ecology of the yithian, a gazetteer of the city of Okeno, and the next installment of a new Pathfinder’s Journal round out this volume of the Pathfinder Adventure Path.Each monthly full-color softcover Pathfinder Adventure Path volume contains an in-depth adventure scenario, stats for several new monsters, and support articles meant to give Game Masters additional material to expand their campaign. Pathfinder Adventure Path volumes use the Open Game License and work with both the Pathfinder RPG and the world’s oldest fantasy RPG.

Pathfinder Campaign Setting: The First World, Realm of the Fey 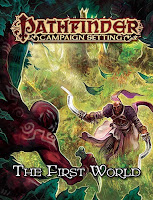 Explore the legendary realm of the fey, where reality reinvents itself and strange creatures peddle stranger wares to the unwary. Learn about the godlike Eldest who rule the First World and how to navigate their fairy courts. Delve for treasures in adventure locations too bizarre for the mortal realm, using new gear, spells, and other rules specifically designed to keep you alive in a world where death is seen as a game. Uncover the true origins of gnomes and other secret histories, battle a horde of new fey monsters, and harness the power of the fairy lords yourself with the feysworn prestige class! 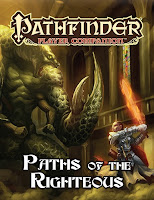 The gods and goddesses of purity and goodness have many holy crusaders and pious clerics among their faithful, ready to take up the cause to fight the forces of evil. But some stand above the others, and follow specialized paths to righteousness that grant powerful abilities and focused talents customized to fulfill a specific role among the faithful. Pathfinder Player Companion: Paths of the Righteous presents fourteen such specializations in the form of unique prestige classes associated with fourteen of the Pathfinder campaign setting’s good-aligned deities, along with additional new options to bolster your character’s crusade against the wicked and devious villains of the world!