What are these strange symbols on the map? They are code for locations where spies must contact secret agents!

Two rival spymasters know the agent in each location. They deliver coded messages telling their field operatives where to go for clandestine meetings. Operatives must be clever. A decoding mistake could lead to an unpleasant encounter with an enemy agent – or worse, with the assassin! Both teams race to contact all their agents, but only one team can win.

Codenames: Pictures differs from the original Codenames in that the agents are no longer represented by a single word, but by an image that contains multiple elements.

Beings of ancient evil, known as Old Ones, are threatening to break out of their cosmic prison and awake into the world. Everything you know and love could be destroyed by chaos and madness. Can you and your fellow investigators manage to find and seal every portal in time? Hurry before you lose yourself to insanity.

In Pandemic: Reign of Cthulhu, you’ll experience the classic Pandemic gameplay with an horrific twist that’ll have you face ten Old Ones, each threatening the world with their unique powers. As players take on the roles of investigators attempting to seal a series of portals before monsters of unspeakable horror pour into our world there is, of course, a high risk of the investigators losing their own minds.

Instead of curing diseases like in the original Pandemic, players seal portals and shut down cults in the classic New England fictional towns of Arkham, Dunwich, Innsmouth, and Kingsport. Can you and your fellow investigators manage to find and seal every portal in time? Hurry before you lose yourself to insanity and the evil that lurks beneath your feet…

In the 2400s, mankind begins to terraform the planet Mars. Giant corporations, sponsored by the World Government on Earth, initiate huge projects to raise the temperature, the oxygen level, and the ocean coverage until the environment is habitable. In Terraforming Mars, you play one of those corporations and work together in the terraforming process, but compete for getting victory points that are awarded not only for your contribution to the terraforming, but also for advancing human infrastructure throughout the solar system, and doing other commendable things.

The players acquire unique project cards (from over two hundred different ones) by buying them to their hand. The projects (cards) can represent anything from introducing plant life or animals, hurling asteroids at the surface, building cities, to mining the moons of Jupiter and establishing greenhouse gas industries to heat up the atmosphere. The cards can give you immediate bonuses, as well as increasing your production of different resources. Many cards also have requirements and they become playable when the temperature, oxygen, or ocean coverage increases enough. Buying cards is costly, so there is a balance between buying cards (3 megacredits per card) and actually playing them (which can cost anything between 0 to 41 megacredits, depending on the project). Standard Projects are always available to complement your cards.

Control your network of spies, gather intel, and break codes in Covert, a game of tactical dice placement, set collection, and timing set in Cold War Europe. Players race to complete high risk Missions by deploying their agents and acquiring the necessary equipment, all while keeping an eye on the needs of future missions and the advances of rival agencies.

Each round, players roll their hand of dice and in turn allocate them to different actions, like moving their Agents, acquiring Agency Cards, completing and acquiring new Missions, and more. Dice are placed on action circles that require players to place their dice numerically adjacent to dice that have already been placed, allowing for rival agencies to thwart their plans — but a good Agent always has a backup plan, and there are ways around everything that stands in your way.

Covert combines simple concepts with a depth of play that allows players the freedom to combine special abilities and card combos to complete their Missions and overcome obstacles. Utilize your assets. Make your move. Don’t let anyone stand in your way.

This screen is the perfect companion for those Dungeon Masters running the Storm King’s Thunder adventure, or any journey along the Sword Coast and the North. The front features imposing images of giants, but reminds heroes that they can be defeated, while the back provides the DM with maps and tables to make overland travel as simple as possible.

When you die, you can take it with you!

Take on the role of Egyptian nobles at the time of the pharaohs, preparing for death and burial in the Valley of the Kings. Players want to fill their tombs with food, amulets, and other treasures, and to do so they acquire cards that are laid out in the shape of a pyramid; purchase cards at the base of the pyramid, and it “crumbles” to bring cards higher in the pyramid to the base where they can be bought. The pyramid resets each round with new offerings.

You score only for cards that you remove from your deck and stash in your tomb, so if you keep using valuable cards for their effects and don’t entomb them before the game ends, you could lose out on big points! Whoever collects the most valuable artifacts in her tomb wins.

Valley of the Kings: Last Rites, the third standalone VotK title, introduces the various citizens and roles of people in the ancient Egyptian kingdom. 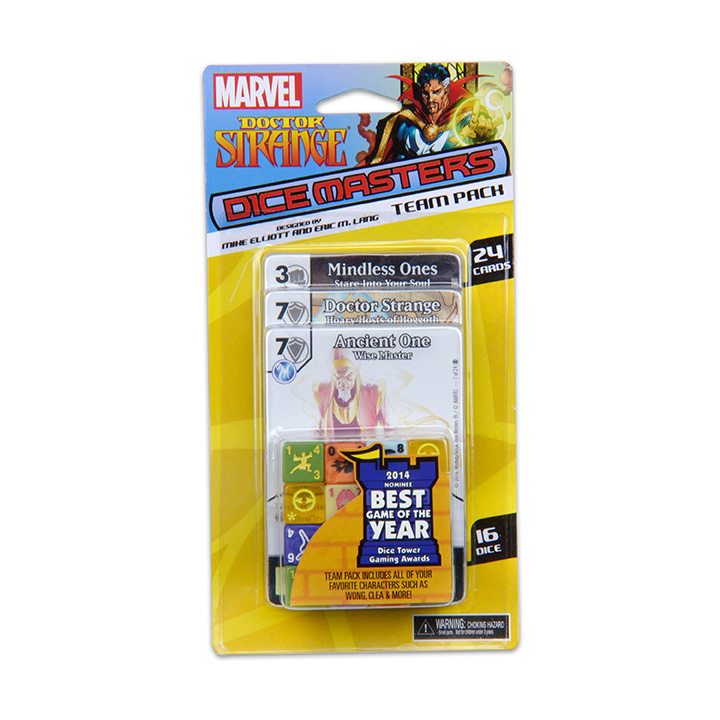 The “Sorcerer Supreme” is joining the Marvel Dice Masters game with the Doctor Strange Team Pack.

This new expansion features Doctor Strange himself, along with a supporting cast including Clea, Wong, and Dormammu.

Team Packs are intended as a starting point for players who want to leap in with a new team, be they new players or veterans looking for something different. By combining a Team Pack with any Starter Set, a player has everything they need to field the new team.